Based on powerful open standards

Smartsite XForms Server and Workbench are, as you would assume from the name, based on the W3C XForms standard.  This international standard with broad acceptance offers the possibility to define forms declaratively. Which information would you like to gather in the form? Which validations and dependencies apply? Which formulas and calculations determine the flow of the data entry process? Each of these options are available in a form that you compose interactively using the Smartsite XForms Workbench. The Workbench is the ultimate tool for website managers and developers to quickly compose complex forms and to test and debug them.

We should apply the same requirements to web forms we apply to other web pages: they should be accessible and meet guidelines, such as WCAG. On the other hand, user friendliness should be paramount. The forms rendered by the Smartsite XForms Engine meet the highest requirements on both fronts. This enables you to reach the highest possible degree of conversion for your website.

Independent Software Vendors who develop solutions in which forms play an important role, may consider integrating Smartsite XForms Server and Workbench into their own solution based on the OEM concept. Should you be interested in this option, please get in touch with our salesteam.

The Smartsite XForms Server and Workbench are currently available to our business partners in a  beta version. The final release of this module is expected later in 2012.

The Smartsite XForms Engine is written as a multi-tiered application in C# (.NET) and can be hosted on any .NET based system. XHTML/HTML5 + jQuery/AJAX rendering is included as a pluggable render device in the XForms architecture. Other render devices can easily be plugged in. The XHTML output is accessible, WCAG and 'Web Guidelines' compliant and built using Progressive Enhancement techniques. Smartsite XForms applications thus downgrade well, even in non-scripting environments, but have a slick, state-of-the-art look and feel in modern browsers. 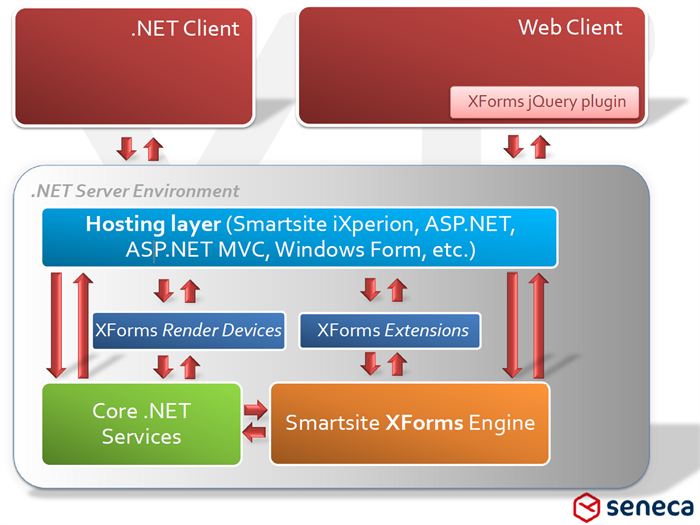 The Smartsite XForms solution consists of a number of separate layers. Processing is done mainly server-side, but client-server traffic is highly optimized by using Json over Ajax and an intelligent jQuery plugin.

XForms hosting is integratied in Smartsite, but the XForms Engine can also be plugged in a standard ASP.NET or ASP.NET MVC environment. Even desktop applications could use the XForms Engine, because rendering is completely separated from the XForms core.