The Site Restart Service (available on the DVD within the Utilities folder) installs as a Windows service and when running acts as a Site Monitor. When a Smartsite iXperion site's application domain recycles (through code or because of a configuration file change for example), Smartsite will detect this event using an attached eventhandler and will write an event to the Windows (Application) eventlog.

This "AppDomain Recycle" event contains specific information, such as the reason causing the appdomain recycle, the site's name and location, etc. 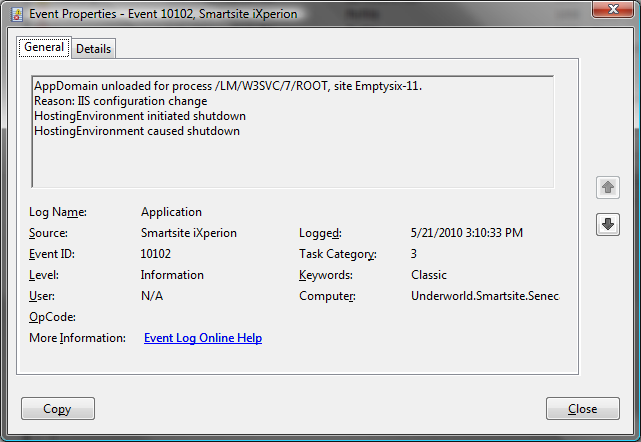 The event details (when deserialized) contains even more details:

The Site Restart Service listens to this specific kind of events (Source="Smartsite iXperion" and Event-ID="10102") when they are added to the Event Log using an EntryWritten eventhandler. All other events are ignored.

When such event (as described above) is detected, the Site Restart Service analyzes the event data and determines for which site the AppDomain recycle has occurred. It then reads the site's smartsite.config configuration file to determine the site's addresses (for both the publication engine and the cms engine).

Both these addresses are then used to execute a http request to, basically resulting in (re-)starting the site. This way, site downtime caused by an AppDomain recycle will be limited to just a couple of seconds.

To install the Site Restart Service, copy the folder from the DVD to a local destination, e.g. Program Files\Smartsite Software. Open an .NET Framework command prompt, change the directory to the local Site Restart Service folder and run the following command:

When using an standard command prompt, run the following command:

To uninstall, just run the same command specifying "/u" as extra parameter.

The configuration file of the Site Restart Service (SiteRestartService.exe.config) holds a few settings with which the behavior of the service can be adjusted.