Several changes have been implemented to provide a better integration with Active Directory and there's even a new LDAP Membership Provider, which allows you to integrate with other Active Directory-like security systems, such as Novell e-Directory.

This article will describe these changes in more detail.

Within iXperion 1.2, the Active Directory Group Membership mapping have been changed, to make it easier for an Domain Administrator to distribute the domain users across the domain groups, without the need to make everyone which should be provided access to Smartsite a member of a particular Smartsite access group. Notice that the group membership mapping described here also applies to the LDAP Membership Provider.

First of all, as of iXperion 1.2, the parent groups of the groups the user is member of are taken into account (recursively). This means that the Smartsite Active Directory Membership Provider now follows the Active Directory group hierarchy. 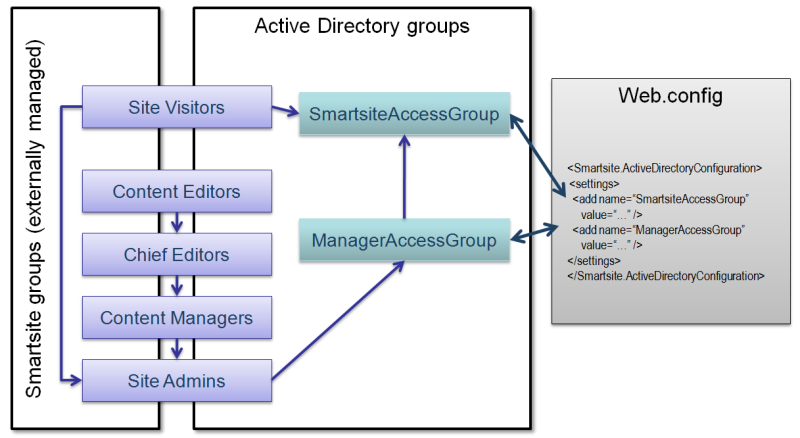 (The example shown above displays the group hierarchy as it should be created within the Smartsite Usergroups, however the Active Directory group hierarchy doesn't and probably shouldn't be the same.)

This makes it also no longer necessary to have a corresponding group for the configured SmartsiteAccessGroup and ManagerAccessGroup with the same name within the Smartsite Usergroups, as was the case in prior releases. Only the groups which are actually used to distribute the domain users into role-specific groups (such as "Editors", "Chief Editors", "Content Managers" and "Webmasters") need to have a corresponding Smartsite Usergroup (with externallymanaged set to true).

When a primary group has been configured for a specific domain account, this group is not returned when querying the Active Directory for "memberOf". Therefore, prior to iXperion 1.2, you couldn't use the primary group (usually Domain Users) as member of the configured Smartsite Access Group. As of iXperion 1.2, the user's primary group is retrieved separately and added to the groups the user is a member of. Therefore, when every user within the Active Directory should have access to Smartsite, you can now just add e.g. the Domain Users group to the configured Smartsite Access Group.

The deprecated VisitorGroup setting did use reversed logic, but shouldn't be used anymore.

When dealing with a large Active Directory implementation with lots of groups, it turned out that the performance of Smartsite iXperion was negatively impacted due to the fact that for each request the current user was checked against the Active Directory.

The Active Directory user objects are cached using the CacheManager, with a sliding time expiration of 10 minutes.

When you wanted to use Active Directory security for the cms manager, you would need to configure an LogonHandler within the site's registry (Security key). Well, that's still the case, however, prior to iXperion 1.2 the LogonHandler you would need to specify was SixSecurity.Windows. And that LogonHandler had its own (COM) implementation to provide Active Directory integration. You'ld also needed to specify the SmartsiteAccessGroup and ManagerAccessGroup within the same registry key.

However, as of iXperion 1.2, there's a new LogonHandler available: SixSecurity.LDAP. This logonhandler uses COM-Interop to call the (almost the same) .NET implementation (Smartsite.Security.dll assembly) which is used on the front-end as well. So, there is only one code-base now and you only need to specify the Active Directory / LDAP configuration in one place, the web.config.

There's one main difference. As the name implies, the COM-Interop always uses the more generic LDAP implementation, regardless of the configured membership provider. It is therefore necessary to provide a SearchBase within the configuration section (which wouldn't be the case if you're just using Active Directory integration on the front-end).

(Note: as of iXperion 1.2 build 2, it is recommended to specify the distinguishedName of the Active Directory root and use an user principal name (username@domainname) as connectionUsername on the membership provider element, so the membership provider is able to search the entire Active Directory. When all users which must be granted access to Smartsite are member of a specific organizational unit, then it is possible to specify the distinguishedName of this organizational unit.)

There's another small catch. Because COM-Interop is being used and the security implementation is called from the cms manager's process (which means Database.Current isn't available), you need to provide the DatabaseId within the Smartsite.ActiveDirectoryConfiguration/settings or Smartsite.LDAPConfiguration/settings element of the web.config. This id should refer to a database connectionstring with the same id as configured within Smartsite.Data.config. See the example below.